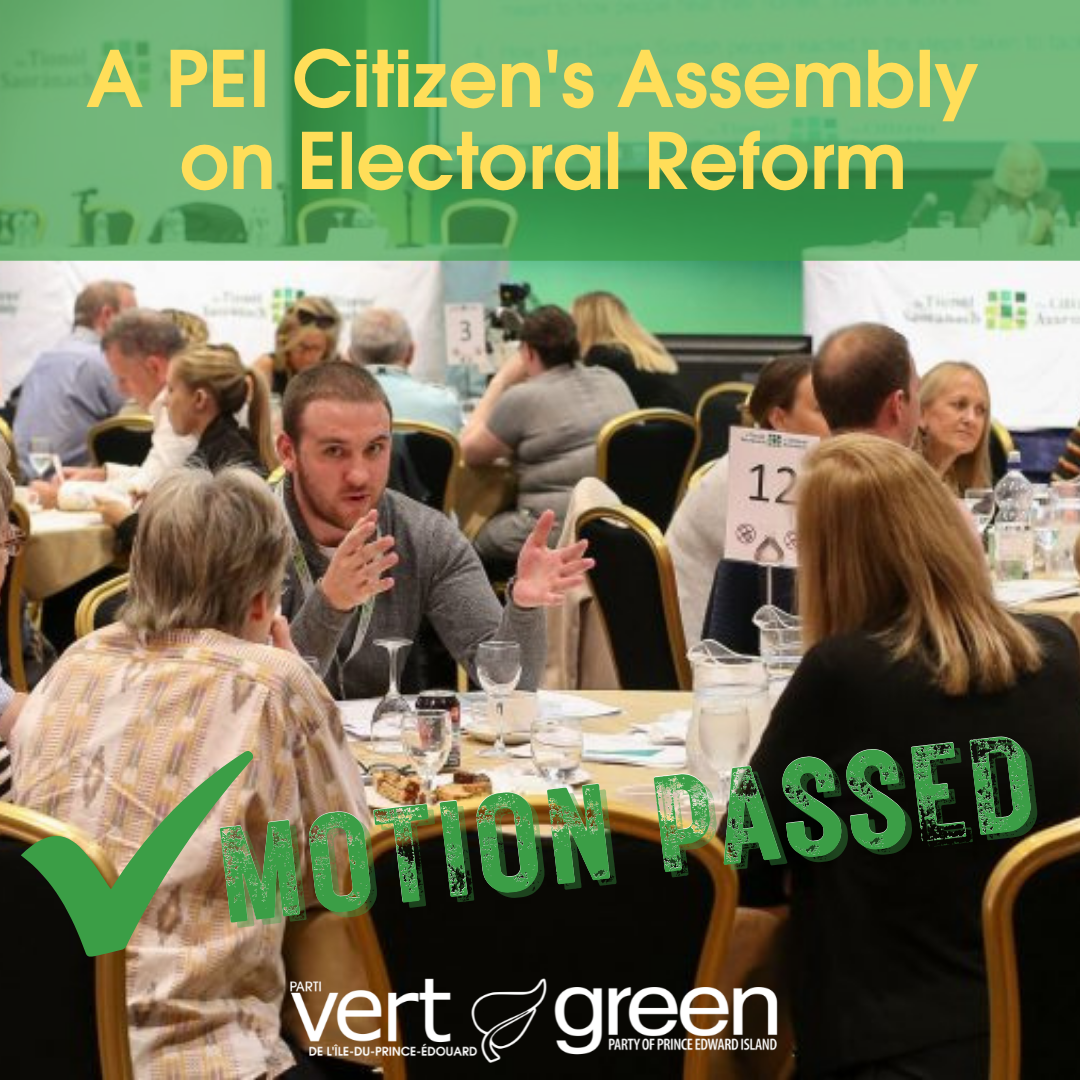 The Green Party of PEI is celebrating the passage of Motion 71: A Citizens' Assembly on Proportional Representation yesterday in the Legislature in a vote that was supported by all Green MLAs, two Liberals including interim leader Sonny Gallant, and three PC MLAs (Premier Dennis King was absent from the Legislature at the time of the vote).

Motion 71 was tabled by District 22 MLA Steve Howard and Green Official Opposition Leader Peter Bevan-Baker, who both spoke to the motion before it went to a 13-11 vote in favour of the motion. You can watch what they had to say about why a Citizens' Assembly on Proportional Representation is important in the video below:

Motion 71, which calls for a Citizens' Assembly of 27 randomly-selected Islanders from every district to engage in a deliberative process to design the best electoral system for PEI, can be traced back to a grassroots policy resolution passed by Green Party of PEI members earlier this year - click here to view that resolution. This is a great example of the Green Party of PEI's commitment to providing grassroots members with meaningful opportunities to shape party policy and even to influence the dialogue in the Legislature.

Mr. Speaker, I’m happy to move this motion which, at its core, is about improving our democracy. Democracy is what brings us here together. It guarantees Islanders a direct say in who represents them. Our democracy is not something we can take for granted—it’s something we must always be evaluating to ensure it’s working for Islanders.

Five years ago, we had a plebiscite on democratic renewal. The unofficial question being asked, according to the Chief Electoral Officer’s report on the plebiscite, was “Is it time for change?”. The answer the people gave was a yes.

There were five options on the table, including the status quo, and as such we used a ranked ballot to distill it down to one choice. That choice was a form of proportional representation.

In response, the Premier of the day made an executive decision not to honour the vote, substituting his views for those of Islanders.

His entire caucus stood as a block to vote against the expressed will of the people. It was at this moment that I personally had had enough and it was the primary factor contributing to me being here in this Legislature today. I replaced a minister who had voted against the people.

The reason it hits so dear to my heart is that I have children who need legislators who can build consensus on a path forward, move towards it, and keep moving forward. The major issues of our time—like climate change— need a sustained and shared effort from our elected officials. We don’t get that from the partisan politics that first past the post fuels. We get lurching in opposite directions as we go from election to election voting out the party that took us in one direction for the party that promises to head the other way. It does not provide a stable foundation for progress.

These lurches are fed by the system of first past the post such that a small sway in the vote can produce vastly exaggerated results. That is bad enough when there are two parties. Now that there are three well established parties on PEI the results can offer even further skewed results. Majorities are more common in first past the post , but these are not majorities that have the support of the majority of the voters. It’s not unusual—in fact, it’s quite common on PEI!— to see 100% of the power to pass laws handed over to a party that is far from majority support. With three parties and 27 districts it is possible that a majority government is handed to a party that only gets 34% of the vote in 14 districts. That means a party needs less than 18% of the total eligible votes to secure a majority. With PR that amount is always more than 50% of the votes. If we want to safeguard our democracy we need to consider proportional representation.

A proportional system would deliver seat counts that more closely reflect popular support . It means more minority governments, but that means more collaborative governance. In the early days of this Legislative Assembly, we heard loud and clear from Islanders that the collaboration that flows from minority governments is exactly the kind of spirit they want to see in their House. It is a credit to every member of this House that we were the envy of the country with our collaborative legislature working for the best interests of the people rather than the best interests of the party.

Not only does proportional representation mean more proportional sharing of power in this Chamber, it also means greater representation of women and underrepresented groups in the Legislature. This has been the experience of the many international jurisdictions who rely on proportional systems. We’ve had important debates in this House about the need to apply different lenses when proposing new legislation and policy: a gender lens, a racial lens, a child rights impact lens, and so forth. It is not enough for Government to undertake this work—we also need a legislature that brings these perspectives to the table. If changes to our electoral system would provide us with a truer reflection of our population, we should make these changes, period.

It’s my belief that Islanders feel better about their democracy when they are able to vote FOR the party that best reflects their values, rather than having to vote AGAINST the party they feel the need to defeat. Ever since I started voting I have, for the most part, felt motivated by fear instead of hope, and I know it’s a feeling shared by many Islanders. That needs to change.

The referendum we had was inconclusive in its results. Neither the Yes side or the No side won. I feel this is very indicative of the flawed manner in which it was designed. Ironically if we used the first past the post system to decide the outcome then proportional representation would have won and if we used proportional representation to decide the results first past the post would have won. We didn’t use either. We had thresholds and rules set to make change more difficult, because if no one wins the system would not change. We had restrictive rules that required advocates on both sides of the question to register and chilled the expression of Islanders who were unsure what they could and couldn’t say. The political motivations of the Government of the day were clear. The interests of the party were put before the interests of the people.

Another flaw in the process has been that there has been no definitive proportional option to debate. There have always been unanswered questions which leave voters with those questions leaning towards not voting for change. I truly believe that once Islanders have a clear choice in front of them, with all of the answers to all of the questions laid out in a form of Proportional Representation that we will get a truer, fairer vote on democratic reform here on PEI. One that we can all honour.

All that context was needed to frame the reason that a citizens assembly is essential to finding a path forward. We need, as even the fated former premier said, “A clear question”. That’s impossible until we have a well defined Proportional system to consider.

This motion seeks to strike a citizens assembly to do just that. A citizens’ assembly is an independent non-partisan, assembly of citizens that is convened to deliberate on complex issues of significant importance in society. As we propose in our motion, and as normally is the case, a citizen’s assembly is broadly demographically representative of society.

Citizens’ assemblies have been used in British Columbia and Ontario to study the question of electoral reform, and have also been used in other countries, like the Netherlands and Ireland, to debate other issues of significance.

Why do I think a citizens’ assembly is appropriate for PEI? First, it has an advantage as a non-partisan body. Whether or not it’s true, politicians of all political stripes are—and probably always will be—viewed as acting in their own self-interest when it comes to electoral reform. It undermines discussions about electoral reform before they even begin. Members of a citizens’ assembly are not burdened with these political concerns, which leads me to my second point. Citizens’ assemblies are empowered to examine evidence thoughtfully, deliberate thoughtfully and put forward what they believe is the best public policy for Islanders. They are not limited by a lack of information or one-sided advertising as one might see during an election cycle.

Even the crafters of the flawed referendum were determined to keep politics out of the process, so they said. No politician was permitted to speak to the referendum during the active period of the referendum. While I personally feel this was more intended to prevent education on the Proportional system, as I mentioned it is in the interest of the status quo to leave questions unanswered, it nonetheless is another reason I hope to see all member of this house vote to take the politics out of it and get Islanders to the table in development of a specific system of Proportional representation. One that we can debate here fulsomely after the work of the Citizens Assembly is completed.

This Government’s first Throne Speech noted Islanders’ “desire to approach our democracy with an open and judicious mind”. It also made this important observation: “While respectful of the traditions of this institution, Government also understands that a rigid adherence to the past is no emblem of strength. To maintain public trust, we must evolve in a respectful, responsible manner.”

We have the power and a duty to strengthen, improve, and evolve our democracy in a way that better reflects the identities and views of Islanders. I encourage all members of this House to support this motion so we can move towards a more reflective democracy on PEI.