Greens in the Leg - Highlights from the past week

Good Sunday morning to you! With the Legislature currently in session, we plan to bring you more regular updates on happenings in the Legislature to keep you in the know - because keeping up these days can be especially challenging in spite of (or because of) all of the different types of media competing for our attention. On Friday and Saturday, the Legislative Chambers hosted the 32nd Annual PEI Rotary Youth Parliament - a two-day event in which high school students from across the Island act as MLAs and have the opportunity to present and debate motions and bills on the floor of the Legislature.

There was lots of fantastic debate, demonstrating the thoughtfulness of Island youth about a whole range of subjects. Bills and motions debated this year covered topics from preventing fish kills to affordable housing, and from coyote control to the creation of a seafood marketing board.

Green Party MLA Hannah Bell (Charlottetown-Belvedere) made history by presiding as the first-ever Green Speaker of the Legislature during part of the Youth Parliament, while Michele Beaton (Mermaid-Stratford) helped chair the Committee of the Whole House during lively deliberations on a Affordable Student Housing Act. Actually for Hannah, this was her second time in the Speaker's role! It turns out that Hannah Bell also served in the role way back in 1985, during the very first Student Parliament, at the age of 16. And notice the significance of the date of the newspaper clipping: November 27th, 1985. That was exactly 32 years to the day before Hannah Bell was first elected to the PEI Legislature in a by-election! According to Hannah: "Some of the topics we debated included mandatory seatbelt legislation, increasing the drinking age from 18 to 19, introducing an Island wide dental program for up to 18 (all things we of course now have!) as well as whether to allow Litton Industries to open a manufacturing plant here in PEI (they built microwaves but also weapons guidance systems) - we voted no on that one."

Flash forward back to November 2019, and your Green MLAs are hard at work helping make the laws of the land as well as holding the government to account as the Official Opposition. Here are some highlights from the past week in the Leg. On Wednesday, Peter Bevan-Baker was honoured to accept and table a petition from Bike Friendly Charlottetown, calling for the current government to build an active transportation lane for cyclists and pedestrians on the Hillsborough Bridge within its mandate - as had been promised by the previous government. In the photo to the left, he his pictured receiving the petition from Sally MacDonald (mother of the late Josh Underhay), Scott Brown and Josh Weale of Bike Friendly Charlottetown.

With a total of 3,255 signatures, this petition is believed to be the largest ever tabled in the PEI Legislature! Way to go to the many volunteers who worked so hard to collect them!

The impetus for the Hillsborough Bridge Bike Lane was inspired by the late Josh Underhay, who had spearheaded the initial petition that caused the previous government to commit to the project, and was an avid active transportation advocate. In table the petition, Peter Bevan-Baker called it "the beginning of what I believe will be a large and great legacy for a large and great human being."

Related to this issue:

WATCH: Mermaid-Stratford MLA Michele Beaton questions Finance Minister Darlene Compton on the failure to include funding for the bike lane in the current capital budget.

IN THE NEWS: Opposition puts pressure on P.E.I. government for active transportation 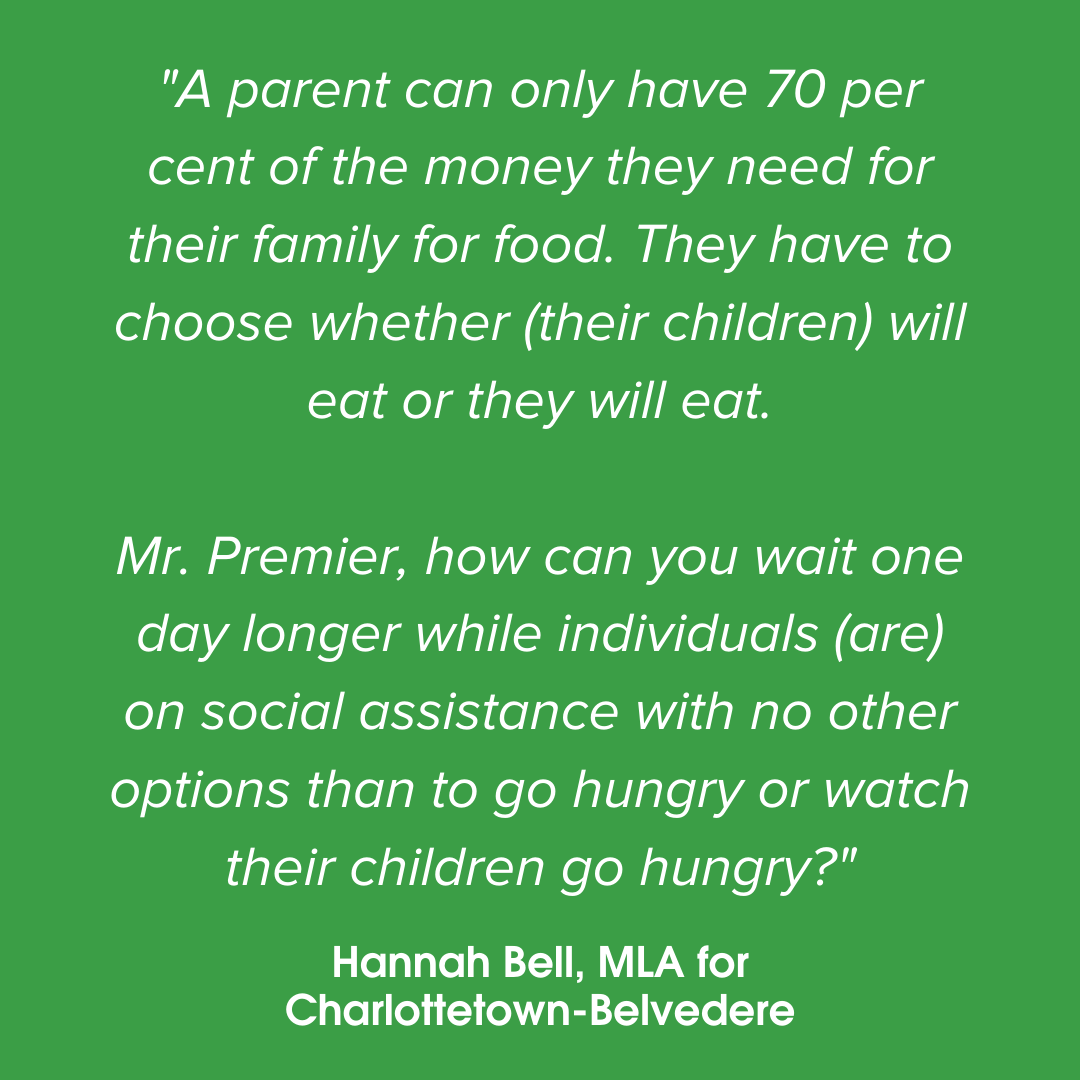 One of the focusses of Green MLAs in the past week has been on helping Islanders most in need, including those struggling with poverty, mental health issues, or addiction.

MLAs Hannah Bell (Charlottetown-Belvedere) & Karla Bernard (Charlottetown-Victoria Park) highlighted the gaps and shortfalls for necessities like food insecurity and feminine hygiene that currently exist for Islanders receiving social assistance. She pointed to impossible situations faced by many recipients, including insufficient food budgets to properly feed their families, and women unable to afford feminine hygiene products and who suffer and are sometimes forced to miss work as a result.

MLA Trish Altass (Tyne Valley-Sherbrooke) questioned the Premier about the lack of mention of addiction supports in the Health & Wellness Minister's mandate letter, and was assured by the Premier that support for those struggling with addictions was indeed one of the government's priorities, calling the lack on mention in the mandate letter "an oversight". Altass went on to question the Health & Wellness Minister about what can be done to better coordinate addiction services on the Island.

MLA Lynne Lund (Summerside-Wilmot) brought her motion on Drug Treatment Courts up for debate. This motion calls on the government to address the spike in drug-related incarcerations over the past few years by using drug treatment courts, an approach which has seen success in other jurisdictions which combine judicial supervision with addiction services and long-term supports for non-violent offenders, and has been proven to lower rates of substance abuse and reincarceration among participating offenders. The motion is still being debated. MLA Hannah Bell's bill, An Act to Amend the Tourism Industry Act, passed second reading last week. If it becomes law, the legislation would require short-term rental websites to start sharing data with government around how many listings they have in the province and how often they're rented out.

Hannah Bell hopes that data would lead to further government regulation of the industry.

"Government needs to step in by actually bringing forward regulations that limit the expansion and the number of short-term rentals that are directly and adversely impacting our housing market," Bell said.

"We need to make those decisions based as much as possible on what the evidence tells us, and having accurate, objective data is a really important part of that." As the P.E.I. government looks to convert more public buildings to biomass heat, the Official Opposition is questioning the net environmental impact.

The capital budget tabled by the government last week commits $6.6 million to add 13 more public buildings to the list of 33 schools, hospitals and other buildings converted from heating oil to biomass heat.

But as MLA Steve Howard (Summerside-South Drive) pointed out in question period Friday, the environmental benefits of switching to wood heat depend on how the wood is harvested, whether plantings keep up with harvested trees, and how long trees are allowed to grow before they're cut.

"When we burn biomass for energy, we initially and immediately emit greenhouse gases, more than burning coal per unit of energy," Steve Howard, who serves as the Green Party's Energy Critic, told the House.

"We then draw the carbon back out of the atmosphere as trees or other crops grow back, but the time to get those greenhouse gases back can be decades." Vital Signs is a national program that uses local knowledge to measure and reflect the vitality of communities. Vital Signs reports are unique in that they make data accessible to the general public on issues identified by the community itself as important. The reports serve as a catalyst for residents, communities, governments, organizations, educational institutions, and others to increase civic engagement and public debate.

The very first bill that Green Party leader Peter Bevan-Baker tabled in 2015 (although it was not passed) was the Well-Being Measurement Act - which would have mandated the government to gather well-being data for the province of PEI similar to that which is now being gathered by Vital Signs.

Watch Peter welcome the release of the PEI Vital Signs report in the Legislature, beginning with the question "How are you?"

While working to hold the government to account, our Green MLAs were also pleased to support the passage of several pieces of government legislation, making for a very productive fall sitting even just two weeks in. The dramatic and troubling increases in the use of electronic cigarettes (vaping) by youth in the past two years, coupled with growing health alarms around vaping, prompted the Legislature's youngest MLA, Cory Deagle, to introduce a private member's bill that both increases the minimum legal age for both vaping and smoking on PEI to 21 (the first province to do so), and will eventually limit the flavours that the vaping industry is allowed to sell on PEI, to limit the appeal of vaping to youth.

When former Premier Wade MacLauchlan created the position of Child and Youth Advocate last January, it was criticized by both Green and PC opposition MLAs for not being a truly independent role, but one that was answerable only to Cabinet.

Now, with the unanimous support of the House, PEI has a truly independent Child and Youth Advocate.

The province has introduced long-awaited reforms that will allow adoption records to be unsealed.

The amendments to the Adoption Act were introduced by Social Development and Housing Minister Ernie Hudson on Tuesday afternoon. The legislation would allow adoption records to be opened up by default, but both parents and children will be given an option of filing a veto on disclosure of their identity. However, current adoption records will not be opened before Jan. 31, 2021.